The WRC has created South Africa’s first water-focused graphic novel series. The novel, aimed at children aged 11-15, follows the adventures of the Thirsty Three, namely Royston, Mpho and Steyn, as they uncover the value of clean water and the role played by water science. The first installment of the proposed series includes an introduction to the WRC as a unique South African organization and its function to assist government in fulfilling its mandate to providing sustainable services to South African communities. It is envisaged that this graphic novel series can go a long way towards sharing the South African water story with a new generation of South Africans in a language that they can identify with.

Issue One: The Mystery of the Impure Water 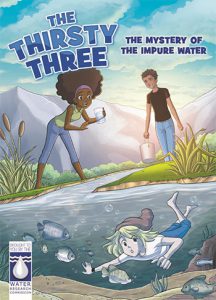